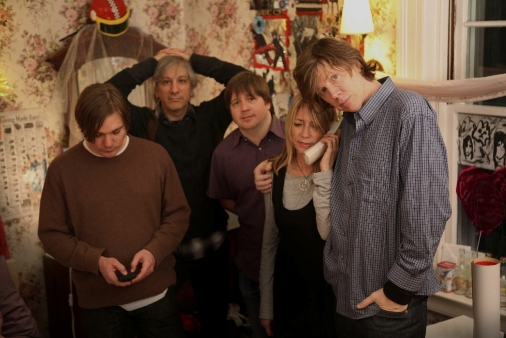 There’s really no blueprint or precedent for Sonic Youth’s career model: No other band in the history of rock music has a comparable longevity:relevance:excellence ratio. The band’s first official release, the Sonic Youth EP, was recorded in 1981 and released in 1982—which means that at some point this year or next, we should be “officially” celebrating SY’s 30th birthday (NB: their actual date of birth probably falls sometime in the late ’70s, when Thurston Moore and Lee Ranaldo started playing together, or in 1980, when Moore and Kim Gordon first formed a band together) . And three decades in, the band continues to produce exciting, jarring, strange and beautiful music. Their last release, 2009’s The Eternal, stands alongside pretty much any classic in the band’s catalog; if it falls a step or two short of, say, Daydream Nation (which, admittedly, it does), that’s not because Sonic Youth have lost their ear or their ambition; it’s simply that they’ve already made Daydream Nation, in 1988, and with that, changed the landscape of what we used to call “alternative” music. Moreover, it’s not as if The Eternal was an unexpected high after a string of late-career fumbles or afterthoughts: It comes on the heels of a handful of genuinely great records, including 2002’s Murray Street, ’04’s Sonic Nurse and ’06’s Rather Ripped, every one of which is an essential piece of SY’s canon. That consistency runs through all of SY’s career, too. Remember, back in the ’90s they were putting out stone classics like Goo and Dirty and Washing Machine… Finally, Demolished Thoughts, the recent Beck-produced solo album by Moore, is a gentle, melancholy thing of grace and quiet reflection—essentially unlike anything heretofore produced by any of the band’s members (save perhaps Moore’s earlier solo work), yet strangely in line with their aesthetic. Now they are playing at the Williamsburg Waterfront—in a community whose identity was partly shaped by the SY aesthetic—and surely a few hundred young musicians will be in attendance. Those guys should be taking notes—this is the blueprint.