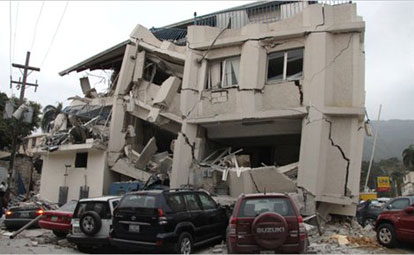 10. 2010 Winter Olympics—Held in Vancouver, Canada, the international sporting event included approximately 2,600 athletes representing 82 nations through 86 events in 15 disciplines ranging from Alpine skiing to the Scottish sport of curling. The United States won the most medals in total, and Canada tallied first overall in gold-medal wins.

9. Icelandic Volcano—Air traffic throughout Northern and Western Europe was seriously disrupted when a volcano beneath Eyjafjallajökull, an ice cap in Iceland, began erupting, sending a volcanic ash cloud into the atmosphere and grounding airplane travel throughout the region. The eruptions and subsequent disruptions spanned from December 2009 through October 2010 and again from April 2010 through May.

8. Chilean Miners—Thirty-three miners working in the San Jose copper-gold mine near Copiapo, Chile became trapped 2,000 feet underground after a cave-in and mining accident that captured global attention. All successfully extracted from the mine 69 days later, an estimated more than 1 billion people across the planet watched their televised rescue.

7. Times Square Bomber—A catastrophic terrorist strike in the heart of Times Square was narrowly averted this May when 31-year-old Pakistani immigrant Faisal Shahzad’s explosive-packed 1993 Nissan Pathfinder failed to detonate and a street vendor notified police of smoke pouring from it. An American citizen who received $15,000 and explosives training from the Pakistan Taliban, Shahzad was subsequently plucked off a Dubai-bound airplane at JFK International Airport and was sentenced to life in prison in October, while warning of more attacks in the future.

6. Ink Cartridge Bombs—Another tragedy is averted in October when, acting on a tip, U.S. and British security forces at JFK International Airport and East Midlands Airport, respectively, discovered and confiscated high-grade explosive devices fashioned from printer toner cartridges in FedEx and UPS packages bound for Chicago synagogues. President Barack Obama addressed the nation from the White House, linking the bombs, which can be detonated remotely by cell phone, to Yemen-based al Qaida in the Arabian Peninsula.

5. WikiLeaks—The website dedicated to the public release of anonymous, top-secret, covert and classified information has published internal documents about toxic waste dumping in Africa, extrajudicial slayings in Kenya and Guantanamo Bay procedures. In July, it published more than 90,000 internal documents and communications pertaining to the U.S. War in Afghanistan. In October, it published more than 400,000 internal documents about U.S. operations in Iraq. In November it published more than 250,000 U.S. State Department diplomatic cables. The impact on the United States’ diplomatic and military operations throughout the world have yet to be quantified, yet the legal troubles of the group’s founder, spokesperson and editor-in-chief Julian Assange have only just begun. He was recently arrested in England and is awaiting potential extradition to Sweden to face sexual misconduct allegations.

4. North-South Korea Tensions—Following North Korean nuclear tests in 2009, the world edged closer to the brink of nuclear war yet again this year following a series of provocations from the secluded regime, resulting in even more sanctions from the United Nations and increased scrutiny from global superpowers. In March, North Korea sank the South Korean naval vessel the Cheonan, killing 46 sailors. In November, North Korea shelled the South’s Yeonpyeong Island, marking the first time it had targeted civilians since the close of the Korean War in 1953 and killing four; two soldiers and two civilians. The North is thought to be preparing for another show of nuclear force in 2011, according to news agencies in the region.

3. U.S. Combat Withdrawal in Iraq—Fulfilling his campaign promise, President Barack Obama withdrew combat troops from war-torn Iraq in August, but left 50,000 “noncombat” troops to remain, officially, to work “behind the scenes” in advising, training and assisting Iraqi security forces, yet in no way prevented from service in harm’s way or armed conflict. A major milestone and campaign fulfillment, yes. An end to American Armed Services in Iraq, however, no.

2. BP Oil Spill—Up to 260 million gallons of crude oil spewed into the Gulf of Mexico over the course of three months when the Deepwater Horizon oil platform operated by British Petroleum exploded in April, killing 11 workers, and solidifying the accident as the worst oil spill in history. Countless marine life have perished and immeasurable ecosystems destroyed, a 22-mile-long plume has been discovered lurking below the ocean’s surface, and the feasibility of offshore drilling contrasted to its potential dangers has been questioned. The spill’s impact will be felt long into the foreseeable future.

1. Haiti Earthquake—With more than 3 million people affected and an estimated death toll of more than 230,000, the 7.0-magnitude earthquake that struck Haiti and devastated its capital Port-au-Prince this January is one of the deadliest such natural disasters on record. The severe destruction left in the quake’s wake—including an estimated more than 300,000 injured and 1 million left homeless—prompted collective global humanitarian relief efforts that continue to this day.